By Realist Theorist - November 07, 2015
"The Richness of Life: The Essential Stephen Jay Gould" is a collection of Gould's essays, mostly about evolution.

This is not a breezy book; even skipping, it took me months. Nevertheless, it is a rewarding book to anyone who is already past the basic misconceptions about evolution and wants to understand it in a little more detail.

If you still have doubts about evolution vs. creationism/"intelligent design", this may not be the book for you. If you think evolution is a process where individual organisms adapt to their changing environments, or if you think things like "since modern society rewards intelligence,  humans will continue evolve into more intelligent beings", you will need a more basic book than this one.

Here are examples of a few misconceptions this book does tackle, and which resonated with my personal level of ignorance:

1. If a feature exists and has lasted for centuries, it must have some evolutionary advantage. (Perhaps a biologist would think this is a laughable misconception, but I've always thought it was plausible.)

2. Features have to develop very incrementally. So, it is not good enough to explain the advantage of some feature. In order to show that it was produced by evolution, one must also explain the evolutionary advantage of hypothetical features that must have existed and grown into the final feature.

3. Slow changes explain the bulk of evolution, and major cataclysms, warmings, coolings, asteroids, and so on only explain a small part of historical changes.

4. Natural variation is entirely random. Of course this could be true depending on the usage of "random". However, take Gould's example of a few islands where one could classify snails on the islands by two distinct patterns: A and B. One might think that the "A" types on the different islands all had a common ancestor, as did all the "B". However, in fact, they do not. The similar distinguishing factor evolved independently in the different populations. In a similar example, three types of Zebra, evolved their striping independently. [And, on an unrelated note, Zebras are white with black stripes, not black with white stripes.]

5. Evolution favors intelligence, and it is somewhat inevitable that humans would finally rise to become the dominant species. 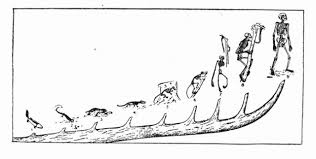 On this last, Gould says that the typical "fish-to-mammals" charts gives us a false picture of evolution as a left-to-right movement. In fact, evolution often proceeds in the opposite direction: toward simpler forms.

He suggests a different visual model: something like a sphere formed from strands emanating from the center. There are organisms at all diameters of the sphere and they are all evolving, not just the ones that are furthest from the center. Also, each evolutionary step can go outward toward more complexity or inward toward simplicity. Even if we assume a equal probability of either, over time the sphere will increase in diameter, with complex organisms emerging, but the center of gravity (measured by number of species) will continue to stay fairly near the core.

[Caveat: Everything above is my paraphrase, and integration, and not to be taken as "essential Gould.'

Popular posts from this blog 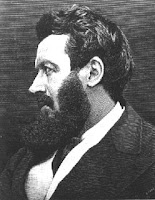 Walter Bagehot was editor of "The Economist" in the 1860s. In " Lombard Street: A description of the money market " he explains the workings of British fractional reserve banking system of his time, under a gold-standard currency. Bagehot provides a lot of interesting tid-bits about the founding and evolution of banking. Of most relevance to today is his explanation of the benefits and dangers of fractional reserve banking and his recommendations of how to best manage a flawed system that has a single central-bank. The Bank of England, then private, was the  de facto  central bank. Bagehot laments the statism that put the bank in this position. However, he thinks it is quixotic to think that the fundamental British structure can be changed. Of course any man-made institution can be changed. Nevertheless, within the scope of his assumption , he makes sensible suggestions for managing a central bank. In today's world of powerful central banks Bagehot's
Read more

History of the U.S. debt 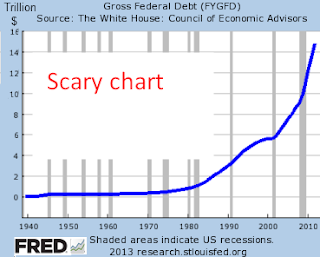 My intent in this post is to question if the U.S. really has a large amount of debt. Some people think we are just years away from a breakdown in the credit of the government. Others think we've gone through bad times in the past and will "grow out of" our problems again. To keep this post simple, all debt figures are "gross". "Gross debt" includes the amounts owed by the government to the Fed and to the Social Security "trust funds". Also, all figures are nominal dollars (i.e. no adjustments have been made for price-increases). [Other, better, measures will have to wait till a future post.] Scary chart: This chart of the "gross" U.S. government debt since   looks scary in the way the amount of debt seems to be shooting up exponentially. Remember the number $16 Trillion dollars. That is the approximate level of gross federal government debt. The total GDP of the U.S., is also about $16 trillion. Has been scary for deca
Read more 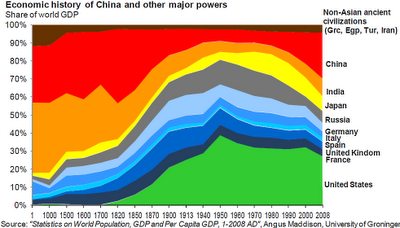 Here's a chart of world GDP, broken down by country share. ( HT: Carpe Diem ). Careful with the x-axis, it is not at all to scale! The basic idea is that India and China had large shares pre-industrial revolution, after which Europe rose. The U.S. shoots up, to over 40% of world GDP by 1950. Then, Japan begins to grow in the 1960s, and China in the 1980s. Suppose countries end up with GDPs proportionate to their populations. What would that picture look like? I've added a bar to the right, showing the break-down of world-population. Look at the U.S. squished down, with less that 400 million out of a world population of over 7,000 million. The biggest change is in the previously un-noticed 'rest of the world". If Africa, the Middle East and so on moved toward freedom, that could be the story of the century.  What if they do not? Here's a chart with a new assumption. Suppose the "rest-of-world" does not increase its relative s
Read more